To Shibuya Yasumasa and those who are trying to help[embedyt] https://www.youtube.com/watch?v=TQg4ukHsYSs[/embedyt] him.

People who try to protect and support Shibuya Yasumasa should think carefully about what they are doing. Are they doing the right things? Do they feel ashamed of themslves? The one murdering my daughter still contumaciously denied his crime and tried to tell lies. To avoid being under sentence of death, he might have suborned them. If so, they should stop to ease their conscience and their parents will not have to be notorious for what they do. It is really such a shame to accept the truth that their progeny is misguided and blinded by money. Thay sold their honour with treacherous lies. People were born with two eyes to see, two ears to listen, two hands to directly feel the world. Some people heard about what Shibuya Yasumasa had done to my daughter but they still did not get clearly. I will try to explain everything as far as I know in this letter. 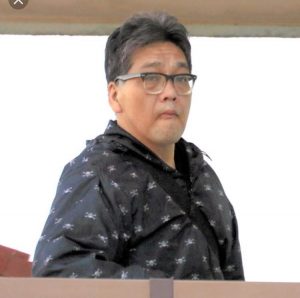 I had been waiting from the day on that Shibuya Yasumasa was arrested on 14th March 2017 til 4th June 2018. I don’t got any information about the investigation, as well as anything related to my daughter’s death. I only know there are some photos that clearly show Shibuya Yasumasa’s car registration number and one proves that he picked Nhat Linh up from school. Moreover, we have testimonies from an old woman who protects children everyday at the three-way crossroads near school and what Linh’s teacher told about her great effort in studying. She reached the standard for the 4th grade, but unfortunately, she will never be able to go to school like other children anymore. Everything is just because of the sorrowful fact that the inhuman murderer Yasumasa Shibuya destroyed future and right to life.

From 4th June 2018 to 18th June 2018, there was a trial with issues that Shibuya Yasumasa and his lawyer agreed to bring out. It was beyond my thoughts. Only after listening to others’ testimonies did Shibuya Yasumasa speak out. He based on the statements of the witnesses and lied about the time. There are some evidences against him: my daughter’s blood stain in his Move car and the handcuffs he used to lock her arms and legs, sign of urine in the backseat,… Car seat cover was torn up and thrown away. They even found many tools to arouse sexually, mask and the necktie supposed to be the murder weapon. According to the statements of the witnesses, only after 12:50 am 24thMarch 2017 did Shibuya Yasumasa start to answer the phone calls. Nobody can demonstrate what he was doing at the time between 8:30 and 12:15 am. From 8:30 to 12:15 am, he was near to the car park of the camping site. Even his ex-wife made statements. She asserted that Shibuya Yasumasa’s daughter had stopped enuresis at the age of five. According to her statements, on 26th March 2017 when Shibuya Yasumasa drove her to the airport by his Move car, she did not see the car seat cover anymore. When the police carried out an investigation, all the cameras had been destroyed and out of order. There are signs that dashboard camera in Shibuya Yasumasa’s car was deleted on 3rd March 2017, right after the day I had to bury my daughter’s dead body. Only after my daughter had rested in peace dis I start to talk to news media. I asked people living near my house and places the killer threw my daughter’s body, clothes and stuffs to re-examine their cameras and notify the police or directly me if they saw anything strange. 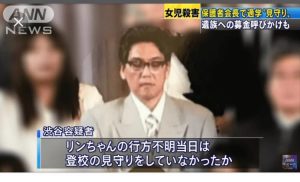 Shibuya Yasumasa might have seen this on newspaper and television, so that he deleted data in his dashboard camera the following day. Shibuya Yasumasa and his lawyer  denied all the evidences the police brought out about DNA and my daughter’s blood stain in his car, as well as his aphrodisiac tools. There is a Vietnamese old saying: “Even a wicked tiger never eats his cubs.”, however, Yasumasa Shibuya selfishly made corrupt use of his daughter just to protect himself.

If Shibuya Yasumasa’s daughter knows she was falsely accused for urinated in the car, how will she look up to her father? Such poor for her to be Shibuya Yasumasa’s daughter. According to the mother, their daughter never urinates in the car. However Shibuya Yasumasa told the police the opposite, just because they spotted the sign of urine on the backseat of his car. And the wife said that the cover of the backseat was mising, cut off and thrown away, however Shibuya Yasumasa declared that his wife, after had given birth, lost her memories and became unreliable. She must speak out her thoughts about her damned husband, who falsely accuses her to lost her memories despite she is just 35 yearsold with normal working abilities.

Shibuya Yasumasa took my daughter to home, came to play with her manytimes without a greeting to us. The old woman know that all but she didn’t told us anything although it’s only 10m from her house to my house. This is clearly a sneaking process already planned. Shibuya Yasumasa tried to approach my daughter for his godforsaken purpose, that explain why he didn’t tell me anything. Normally if the children want to play together, their parents will come to inquire before let them play,much less take her back to house by his car.Just only this action also deserves to be sanctioned if it is true. To me this is the fabrication of evidence for Shibuya Yasumasa to legitimize the story of my daughter getting into his car from before and the blood stains that have existed since then. 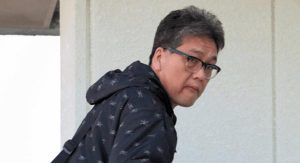 According to the examination of the police, food in my daughter’s stomach had not been totally digested yet, which also means she had just died after meal under 4 hours. So that my daughter had died before 12 am 24th March 2017. Shibuya Yasumasa kidnapped, tortured and took obscene actions, which is even considered rape but the investigative office just reported thaat it waa obscene actions. He killed my daughter instantly after sastifying his sexual passion. And yet, after all he had done, there are some people who believe that Shibuya Yasumasa is guiltless, then support and protect him. Just reading about my daughter’s death in the newspaper makes people shiver for his sin, however, there are those who say that it is not a savage crime. I wish they could be enlightened and change their mind after reading this letter. Up till now, Shibuya Yasumasa still have contumaciously denied his crime, even colluded with some inhuman ones. He may have suborned with a lot of money to control them, to mislead them to do the wrong things. I have read the information about Shibuya Yasumasa’s letter which makes some people who don’t know the truth plead for him. His letter told many things to deny what he had done. It is fake words that only inhuman people and ones who can make no difference between right and wrong can believe that he is guiltless. Just a sentence in his letter “ピンクの靴をはいて 家をリンさんは家を出ているが 父親は黒いくつをはいて出ているといってケイサツは黒いくつをさがしていた” (Translate: Linh left home in pink shoes but her father said that she was wearing black ones and the police were looking for them.)is enough to prove that Shibuya Yasumasa killed my daughter. Only the murder knows which and what colour of the shoes my daughter wore that day. Up till now, we still have not found those shoes. Moreover, with the following sentence, everybody can realizehow Shibuya Yasumasa probed, snooped around and found the opportunity to kidnap Nhat Linh “リンさん宅周辺は道はばがせまく 1時間に130台以上通行するぬけ道のため路上駐車はムリであるし目ゲキ証言が一つもない“.(Translate: The road near Linh’s house is so dense with about 130 vehicles per hour, so that it is unlikely to stop the car and nobody saw I kidnapped Linh with their eyes)

In this time, the Tokyo Spreme Court will definitely see thr pre-planning crime and cruelity of Shibuya Yasumasa. He showed no repentance. He is worth the death penalty. He brought out many sufferings, cost us a lot of time, money and effort to solicit and receive signatures from people. I once believed that 26th June 2018 would be the last day I had to solicit for signatures to demand the death penalty against Shibuya Yasumasa. I even could not believe I will have to go on doing this for the 4th time. I used to just desire the Japanese to help me, I thought it was enough. But the first trial did not inflict him the penalty he deserves. In this time, I am asking people all over the world to help me to chastise the evil Shibuya Yasumasa.

To those who support Shibuya Yasumasa, if you happen to read this, please stop your intention of protecting the murderer. If not, you will surely feel regret oneday. Poor those who gave births to people who have 2 eyes, 2 ears, 2 hands and a brain but still be misled by the wrong things. If Shibuya Yasumasa read this letter, he should be stricken with remorse. Is he an evil? Why doesn’t he have humanity? At the court, Shibuya Yasumasa said he was ill and he could not see anything with his eyes. He even did not deign to stand up to greet the judge, how could he still write and read the letter to claim innocence? Shibuya Yasumasa made a mistake when he sent the letter to wrong people and erote those words he should not write. Just a sentence in his letter can I prove Shibuya Yasumasa is the one who murdered my daughter. As I said, I gave him and his lawyer opportunity to prove that he was not related to my daughter’s death, I waited and listened to the deceitful story that maybe only Shibuya Yasumasa could make up and speak out. What he said annoys everyone attending at the trial, and I myself do not know how to repress my anger. I think if Shibuya Yasumasa’s wife and daughter knew this, even they could not stand it. But the truth is always the truth. Nobody can turn white into black, as well as conceal his crime. “The mills of God grind slowly, yet they grind exceeding small.”, he will have to pay for what he had done. If he spoke the truth and showed repentance from the beginning, he might hope for mercy from the law. But with his contumaciousness, there is no way else but giving him the death pennalty. Once I know exactly the one killed my daughter, he will be strictly punished with the punishment he deserved-the death penalty. 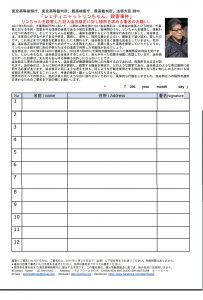 Finally, I want to tell Shibuya Yasumasa and those who are trying to help him: “Live and do what you will not regret and feel ashamed of yourselves. When you are asleep, if a spirit appears, just keep calm and ask after her/him. If she/he is pitiful and needs your help, do whatever you can for the salvation of her/his soul. Vice versa, ifshe/he was a bad person before death and really worth dying, never tolerate and just chastise her/him. And if the spirit turns up because of your evil actions to her when she was alive, and you have to live in fear, you should do what you can do now to redeem your faults.”

Everyone in the political world, please sign.
Please print and fill in the following signature form and send by post.